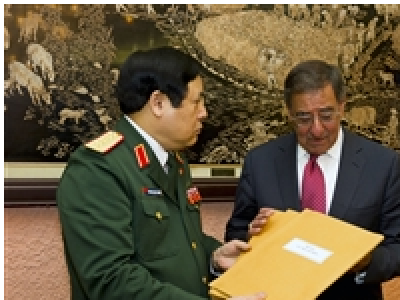 
U.S. Defense Secretary Leon E. Panetta accepts letters from Vietnamese Defense Minister Phung Quang Thanh, in Hanoi, Vietnam, June 4, 2012. The letters were written by American service members from the Vietnam war. DOD photo by Erin A. Kirk-Cuomo
The “artifacts” are a diary kept by Vietnamese soldier Vu Dinh Doan in 1966 and letters written by Army Sgt. Steve Flaherty in 1969. These are more than artifacts, they are voices from the grave, and they will now speak to the families of these fallen men.
Doan and Flaherty carried these items through the combat and heat and pain of the Vietnam War. They put their thoughts, feelings and experiences in these missives.
These two men were enemies. Yet today, their stories are intertwined and their words are helping to bind the two nations together. And it is a testament to other men -- who were also once enemies -- that these artifacts can go to their families.
Those two men are Vietnamese Senior Colonel Nguyen Phu Dat and former Marine Robert Frazure.
Flaherty was killed in action while serving with the Army’s 101st Airborne Division in March 1969. He was carrying letters he was writing home with him when he died. Some are hand-written. One is typed. One has what looks like blood on it.
Vietnamese forces took Flaherty’s letters and used excerpts of them for propaganda broadcasts. At that time, Vietnamese Senior Colonel Nguyen Phu Dat saved the letters. Following the war, the colonel contemplated how to return them to Flaherty’s family, but there was no way.
In 2011, Phu Dat referenced the letters in a Vietnamese online publication about documents kept from the war years that Robert Destatte, a retired Defense Department POW/Missing Personnel Office employee, found. He brought the issue up to DOD officials.
Earlier this year, DOD and State Department employees contacted Vietnam’s Office for Seeking Missing Persons to assist in returning the letters to the Flaherty family.
Robert Frazure served in Vietnam in 1966. His unit of the 7th Marines was part of Operation Indiana near Quang Ngai in northern South Vietnam in March 1966. Eleven Marines were killed and 55 wounded in the operation. Following the battle, Frazure saw a small red diary on the chest of Vi Dinh Doan, a Vietnamese soldier killed in a machine gun pit. Frazure took the diary and brought it back to the United States.
Earlier in March 1966, Frazure had lost a friend in combat. Gary E. Scooter was killed in action during Operation Utah. Decades later, Frazure met Scooter’s sister Marge who was conducting research for a book about her brother’s life and service in the Marine Corps. Frazure asked Marge for her help to return the diary to the family of Vu Dinh Doan.
In February 2012, Marge Scooter brought the diary to the PBS television program History Detectives to research the diary and try to find Doan’s family. The program did, and asked DOD and the State Department to help return the artifact.
The Flaherty letters paint a picture of tough combat. In one letter to Betty, Flaherty writes, “I’m sorry for not writing so long but we have been in a fierce fight with [the North Vietnamese Army]. We took in lots of casualties and death. It has been trying days for me and my men. We dragged more bodies of dead and wounded than I can ever want to forget.”
In a letter to his mother, the sergeant wrote, “We couldn’t retrieve the bodies of our men or ruck sacks and when we brought airstrikes, jets dropped napalm and explosives that destroyed everything that was there.” And finally, to a Mrs. Wyatt, Flaherty wrote, “This is a dirty and cruel war but I’m sure people will understand the purpose of this war even though many of us might not agree.”
The letters and diary are person-to-person expressions of history, Panetta said during the ceremony exchanging the artifacts.
“There were many lives lost in that war both from the United States and from Vietnam,” the secretary said. “If we can work together -- both of our countries -- to develop a better relationship … all of the sacrifice involved in that war will have proved worthwhile because we will improve the peace and prosperity of the Asia-Pacific region.”
Proudly powered by Weebly