This page is for the announcement of those
screaming eagles that have gone to their
​rendezvous with destiny.

I recently received correspondence from Ernest R. Stephens, brother of SSG Forrest E. Stephens, informing me of his passing.  Ernest became an associate member (1017-A) and attended reunions with Forrest.  Forrest passed away on September 28, 2020, after a year long battle with cancer.  Forrest served in the military for a total of 32 years.  He completed two tours in Vietnam, the first with the 25th Infantry Division (Tropical Lightning) and his second with the 101st Airborne Division.  Ernest and Forrest talked about the reunions the day before he passed away.  He said they were some of the best times for him and myself.  Rest in peace brother.  You have completed your Rendezvous With Destiny.  For those that attended the Colorado Springs reunion in 2017, brother Ernest won the raffle drawing for the AR-15 rifle donated by Bryan Morrow.
DON D. LEGG
For those who knew him, Don Legg, passed away November 24, 2020, after battling cancer.  He served with B/1/502nd.  He and his wife Cindee attended our 2017 and 2018 reunions.  After high school, Don enlisted in the Army and served with the 101st.  He served alongside Army brothers in arms in the Vietnam War and enjoyed his annual reunions with them.  He was very happy to reconnect with his dear friend John Stillman.  Until recently, they had no contact since Vietnam.  For his combat service Don, was awarded the Purple Heart w/olc, Republic of Vietnam Campaign Medal, Parachute Badge, Combat Infantry Badge and the Bronze Star.
For the full obituary you can go to the following link:  https://hummelfuneralhomes.com/obits/don-legg.
RAY (LITTLEJOHN) GARREN
Ray, was born in and lived his life in Greenville, SC.  He passed away on May 14, 2020.  He served honorably in Vietnam with the 101st Airborne from July of 1969 until July 1970.  He served in Co. B, 1/502nd and HHC 2/502nd.  For his service Ray,  was awarded the Bronze Star Medal, National Defense Service Medal, Vietnam Service Medal, Vietnam Campaign Medal w/60 device and the Combat Infantry Badge.
JAMES PICKETT
James passed on July 28, 2020.  James was the brother of Wilbert (Bill) Pickett, who served with Co. A, 1/502nd in Vietnam 68-69.  Bill relates that his brother had complications due to Covid-19.  Brother Bill Pickett resides at 936 Lake Village Drive, Apt. 6, Chesapeake, VA 23323.
RICHARD H. ELLIOTT
Richard was a member of Co. D, 1/506th Infantry from June 1970 to October 1970.  He passed away on March 20, 2020 at his home in Bervely Hills, FL.  He was member 682 on our roster.  We only learned about his death after his mail was returned to us.  We were not able to obtain any additional information.
JOHN MARLOWE passed away in suddenly in May 2021, from an apparent heart attack.  John was one of our younger members at age 69.  He was a long time member of this organization and had served as Past President and several terms as our Sergeant at Arms.  Condolences may be sent to wife, Mary Marlowe at:  10430 SW 199 Street, Cutler Bay, FL 33167-8511
OTIS CURRY, age 91 of Fayetteville, NC, passed away on August 31, 2021.  Otis and wife Sylvia attended many of our reunions and we knew him as the Gentle Giant.  Not only because he was very tall but he was a very gentle and kind individual.  He had served as a chemical NCO with the 101st in Vietnam. 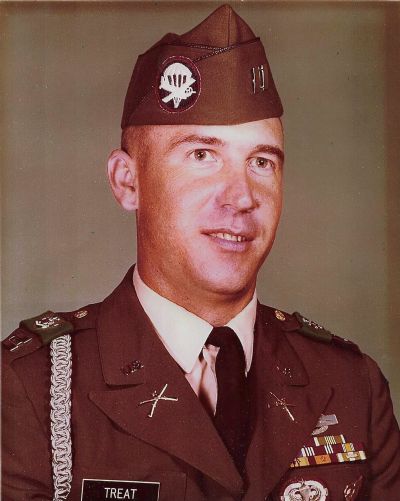