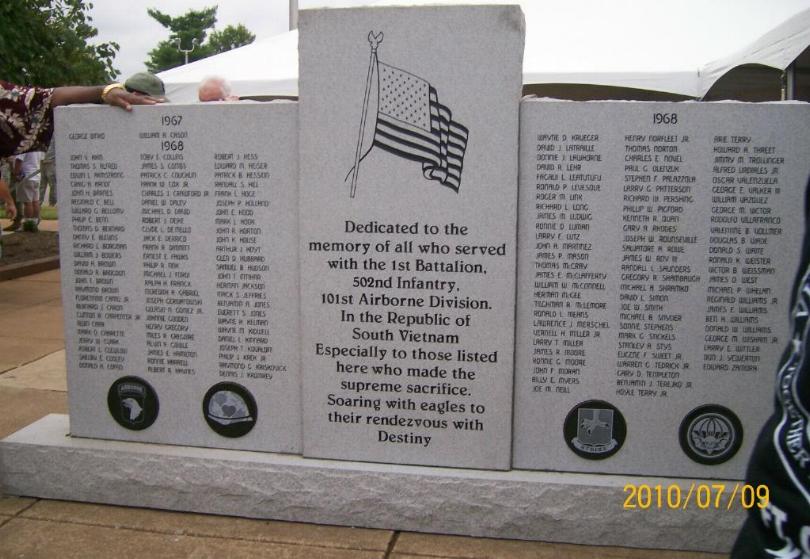 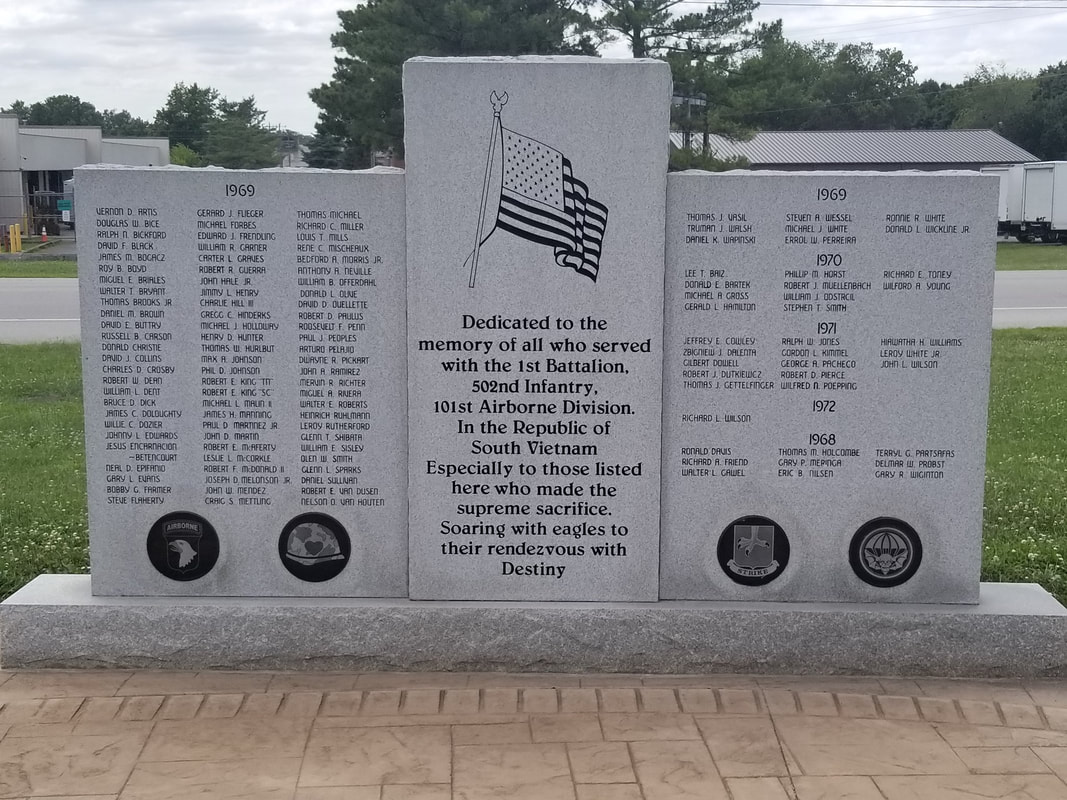 by Heather Huber, Courier staff
In 1972, the last 1st Battalion, 502nd Infantry Regiment Soldier died in the Republic of South Vietnam.  Now almost 40 years later, all 266 Soldiers from the unit, who died during the Vietnam War, have been immortalized at Fort Campbell.

A ceremony was held Friday at the battalion headquarters to unveil a monument dedicated to the fallen of the 1-502nd.  “It’s never too long for these people to be recognized,” said Tom Barrett, memorial committee chairman.  “These people weren’t recognized 40 years ago.  These people didn’t choose the war they fought in.  These people just stood up and did their duty and accepted the ultimate fate.”

Back in 2004, Barrett was visiting the battalion headquarters with his war buddies, Dave Nesbitt and Wally Morrow, when he saw a monument remembering the Soldiers of 2-502nd who died in Vietnam.  The three searched the area but couldn’t find a monument for their fallen.  The three men teamed up with Larry Weisbarth and James ‘Doc’ Feliciano, all members of A Company during the war, and over the next six years raised $18,000 starting with the raffle of a rifle captured in Vietnam.
​
“It was a daunting task,” said Morrow, memorial committee secretary and treasurer.  “It’s been a labor of love.  As we get older we find out we want to do something for the guys that didn’t come home with us.  There are guys there that were great friends. It’s something that had to be done.  If we didn’t do it, who was going to?”
​
Before the monument was revealed, a Silver Star was presented to the Family of Pvt. John Martin. Martin distinguished himself while serving as a machine gunner with the first platoon of company A,  July 8, 1969 near Chu Lai, Republic of Vietnam. The first platoon was moving along a narrow jungle trail when it was ambushed by a company sized enemy force.  Martin immediately returned fire, opening a gap in the enemy’s ambush and the remainder of the squad quickly moved through the opening in order to get out of the killing zone.  Martin then lead the squad through the thick underbrush coming face to face with the enemy on numerous occasions. Each time a carefully aimed burst from his machine gun silenced the enemy and allowed the men to move on in their attempt to get back to the company.  The overpowering enemy reduced the squad down to Martin and his assistant gunner.  As the men broke into an open area, four or five enemy soldiers jumped on Martin in what seemed to be an attempt to take him prisoner.  He struggled with them and managed to seriously wound two of them.  The enemy then fired upon him, knocking him to the ground and wounding him several times.  With his machine gun out of ammunition, he got to his feet and fought the enemy using hand to hand combat until he succumbed to his wounds.
Martin was awarded the Silver Star posthumously, but his Family never received the award.  On Friday, Capt. (Ret.) Mike Donovan, Martin’s platoon leader at the time, presented the award to Martin’s brother, Elmer Martin.

To mark the occasion, Nesbitt spoke as both a friend and a Soldier who had walked along side many of the fallen. “You and I are gathered here today, lest we forget, lest our nation forget those who sacrificed the breath of life in all our wars right up to the present day,” Nesbitt said. “The measure of such sacrifice can never be taken.  It cannot be matched by anything one human being can do for another.  The sacrifice of one’s life is eternal, it lasts forever.  We all paid a price, but none so much as the 266 men whose names are engraved upon this monument.  I say to you, all the monuments in the world are not worth the life of one of these brave men we honor today.  But this is our way of preserving their memory.  It is fitting that their names stand here on this monument for all the world to see so they won’t forget that freedom is not free.” 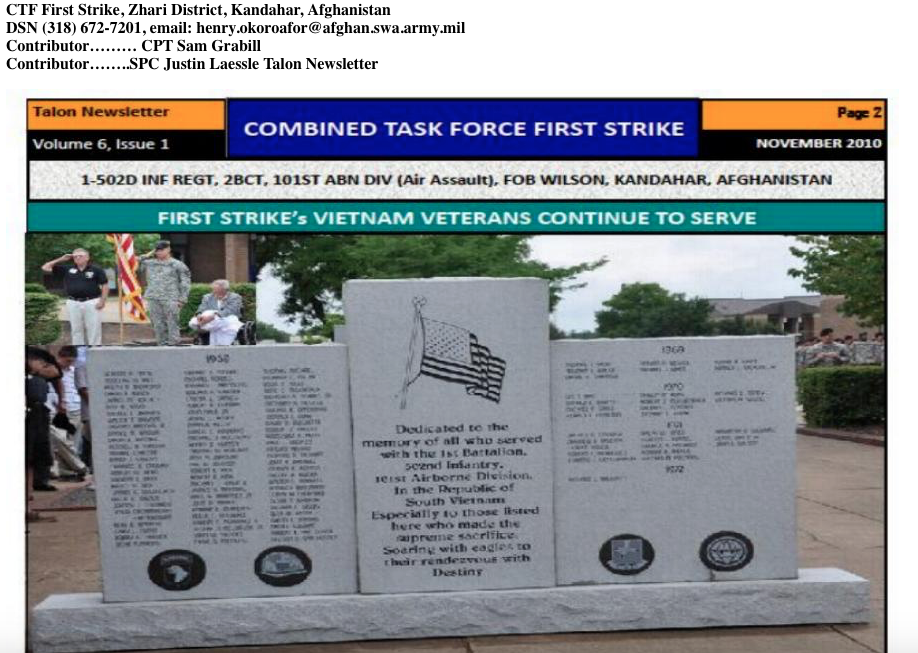 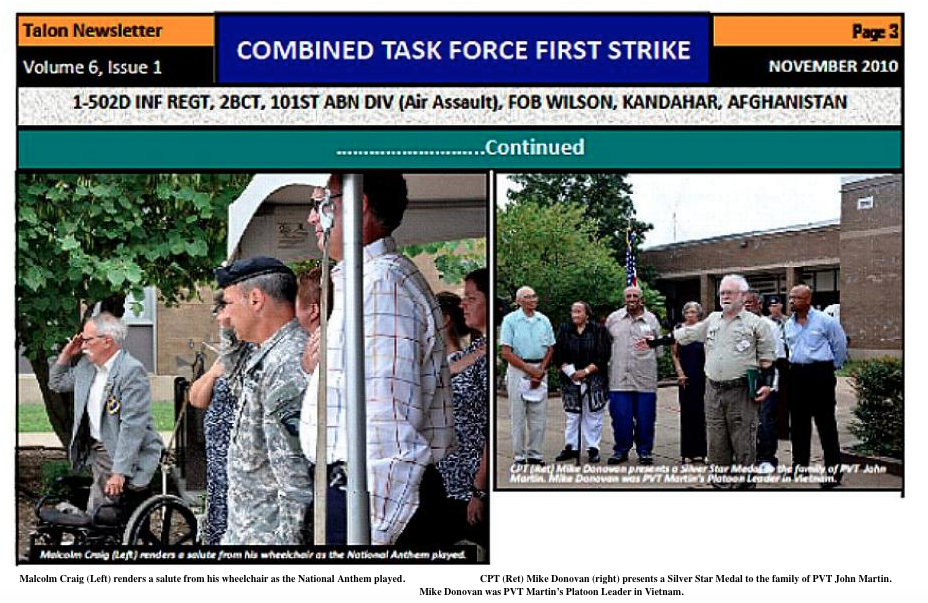 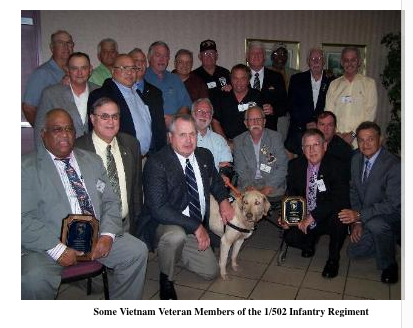 1st BATTALION 502nd INFANTRY TROOPERS
WHO MADE THE ULTIMATE SACRIFICE

The United States Army participated in 17 Battle Campaigns in the Republic of Vietnam during the period of
1962 - 1973.The 1st Battalion 502nd Infantry participated in the 13 campaigns listed below.
The Streamer is yellow in color with three red stripes through the center. It has a green stripe on each side. The yellow with red stripes was suggested by the flag of the Republic of Vietnam. The green alludes to the jungle. The following inscriptions in white are authorized: