The Battle of Ap Dong Lam ​ 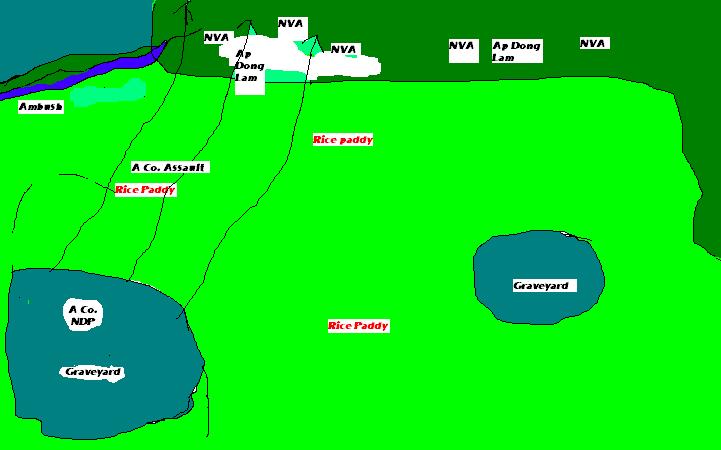 The first thing I remember about it is when Sgt. Otero, Sgt. Tetrick, and SP/4 Laird went on a scouting mission into the village next to Ap Dong Lam.  They made contact with the enemy and Sgt. Tetrick (My squad leader) was killed by automatic weapons fire.  He was a tough fearless soldier and it really got to me to see him shot up the way he was.  Laird brought his body back.  I put his gear on the chopper when they carried him out.  They killed some of the NVA in the contact.

After we got resupplied and our wounded and dead were taken out, we moved to a graveyard next to the vilage of Ap Dong Lam.  Third platoon sent out an ambush to the left of Ap Dong Lam that night.  They said the NVA walked into their kill zone with their AKs slung over their shoulders not suspecting they were fixing to die.  They sprang the ambush and pulled back to the NDP.  They were not sure how many they got.  I believe they brought some AKs back with them.  We were also mortared twice during the night in this graveyard.

I can't remember everything that happened the next morning, but I do remember we were being fired on from the village and Weisbarth and Kosnick put some M-79 rounds on some gooks heads and also set a fire.  There was also some artillery fire called in on the village.  My squad was sent in to take out an enemy machine gun that was firing at us.  Our squad went in alone on this machine gun across this paddy.  How we all made it to the edge of the village with this gun firing at us every time we jumped up to run toward the village, I don't know, but we made it.  They pulled the machine gun back when we got close.  We took out some more enemy positions along the edge of the village and then stayed trapped there for 4 or 5 hours.  One of our guys had to throw 3 grenades into one bunker to silence it.  He then stood up and said "I got him" and promptly got his helmet shot off his head. Didn't hurt him. I heard an explosion down to the left of where I was and they passed the word down that Clewlow was dead.  I don't know if it was a RPG, grenade, or booby trap that killed him.  We had four or five rockets or RPGs fired at our position.  Most of them went over our heads and blew up in the rice paddy about 20 yards behind us, but one hit a banana tree right where we were and blew up.

I don't know to this day how we survived that one.  It blew banana tree and dirt all over us and didn't hurt anybody bad that I remember.  The guy to the left of me about 6 feet was almost touching the banana tree that it hit. I was the last man on the right side.  I carried 6 grenades with me on this assault and many clips of ammo for the M-16. We fired up most of our ammo and threw most of our grenades during this 4 or 5 hours we were there.  I had 1 clip left and 1 grenade when the word came at dark for us to pull back.  We made a hasty retreat back to where the rest of the company was.

The next day was when the whole company assaulted the village and the enemy let the company get in the village and started popping up out of holes shooting people.  We had come in bringing up the rear after we had such a bad day the day before and already lost two men from our squad.  The enemy just flat ran us out of that village that day and inflicted many casualties on us.  I remember walking away from the village helping carry some of the dead and the enemy shooting at us.  We were just walking in the open.  One of our guys had been shot dead between the eyes.  His buddy had been shot in the side and it didn't look like a wound that would kill someone, but he was dead too.  I believe the enemy had a sniper with them.  There was also talk there were some Chinese advisors with them too.  When I got back to the graveyard, I laid on top of a grave and was shooting back in the village.  I heard a bullet go over my head and then a few seconds later, one hit the tombstone beside me.  I decided someone in the village was shooting at me and decided not to give him a third clear shot at me. I got down behind the grave and finished this day from there.  After our first full assault on the village we had 3 MIA's.

The last day, we went through the village and the enemy had slipped away.  I believe we were credited with 57 enemy KIA.  We had lost 10 KIA and many WIA. We also recovered our 3 MIA's.  They estimated we were fighting two NVA companies or more.  This battle is not well known by many, but some men from A Co. remember it well. 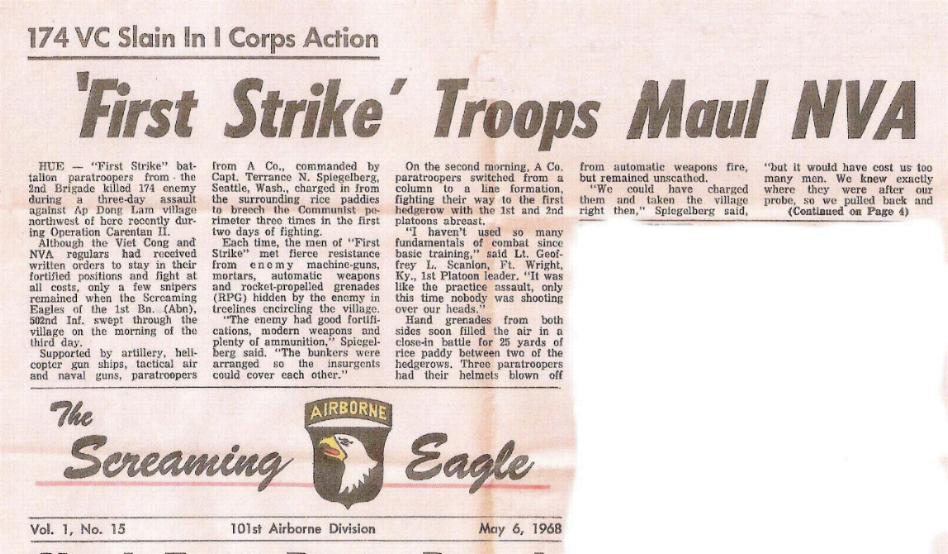